Christel Heydemann is Chief Executive Officer at the Orange Group since 4 April 2022. She graduated from Ecole Polytechnique (France) and from the Ecole Nationale des Ponts et Chaussées (France). She began her career in 1997 at the Boston Consulting Group. In 1999 she joined Alcatel where she held various executive positions, notably during the merger of Alcatel and Lucent. In 2005 she moved to the sales division of Alcatel-Lucent where she was in charge of SFR and Orange key accounts. In 2008 she was appointed Sales Director France and Member of the Executive Committee of Alcatel- Lucent France. In 2009 she negotiated a strategic alliance with HP in the United States and was then promoted in 2011 to the position of Executive Vice President Human Resources and Transformation. She joined Schneider Electric in 2014 as Strategic Alliances Senior Vice President with the mission of accelerating, launching and promoting IoT solutions through the development of strong partner network, before being appointed in 2016 Corporate Strategy & Alliances Senior Vice President.

Digital will have the future we give it 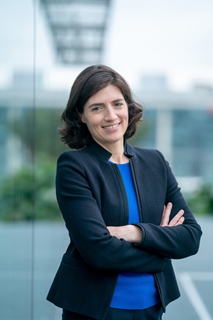