Bernard Arnault is Chairman and CEO of LVMH Moët Hennessy – Louis Vuitton, the world’s leading luxury products group. Born to an industrial family in Roubaix, France on March 5, 1949, Mr. Arnault attended the Roubaix lycée and the Faidherbe lycée in Lille. He then went on to study at the Ecole Polytechnique. He began his professional career that year as an engineer with the Ferret-Savinel construction company and successively was promoted to various executive management positions before becoming Chairman in 1978. In 1989, Mr. Arnault became the majority shareholder of LVMH Moët Hennessy – Louis Vuitton, creating the world’s leading luxury products group. Mr. Arnault has been Chairman and CEO of the company since that date. Mr. Arnault is also President of the Board of Directors of Groupe Arnault S.E. (his family holding company). He has been awarded the honorary titles of Grand Officier de la Légion d’Honneur and Commandeur des Arts et des Lettres. 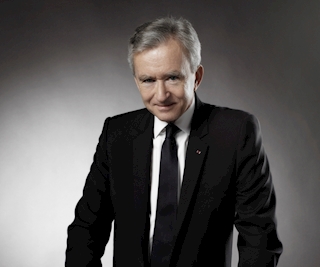